Office of the President

Dr. Christopher A. Capuano became the University’s eighth president on July 1, 2016, following the retirement of President Sheldon Drucker. Dr. Capuano previously held a series of leadership positions at the University over a period of more than 25 years, most recently as University Provost and Senior Vice President for Academic Affairs.

As University Provost, Dr. Capuano provided important decision making in identifying and appointing a strong leadership team in the School of Pharmacy and Health Sciences, which resulted in consistent enrollment growth and full accreditation with the Accreditation Council for Pharmacy Education. In addition, he was instrumental in securing a large gift to support the University’s new Daniel and Martina Lewis Center for Healthcare Innovation and Technology. Moreover, he was the driving force in developing the University’s 2015-2020 strategic plan, working with President Drucker, the Board of Trustees, and faculty and staff across the University, including at the University’s two international campuses in Canada and England.

Working closely with the Vice Provost for Academic and International Affairs, the Associate Provost for Educational Resources and Assessment, the College Deans, and the Academic Policies and Research Committee of the Faculty Senate, Dr. Capuano has led much-needed changes to the University’s nationally recognized University Core program, the adoption of the Individual Development and Educational Assessment (IDEA) system for both instructional and course assessment and development, and important changes to requirements for completion of baccalaureate degrees at the University, including the establishment of uniform general-education requirements across similar programs.

Prior to becoming University Provost and Senior Vice President for Academic Affairs, Dr. Capuano served as Vice Provost for International Affairs. In that position, he provided oversight of the University’s Office of Global Partnerships and worked closely with the University’s Office of Global Learning to facilitate study abroad and other international initiatives. Moreover, he led the development of the University’s new campus in Vancouver, British Columbia, Canada, providing oversight of academic and non-academic responsibilities, including accreditation of the campus and all its programs, the hiring of faculty and staff, developing and monitoring the campus’s budget, and ensuring that the campus met the objectives outlined in its strategic plan. In addition, Dr. Capuano served as the Vancouver Campus Provost for a year during a critical transition period.

As Director of the School of Psychology for nearly 15 years and a former doctoral faculty member in the University’s Ph.D. Program in Clinical Psychology and Psy.D. Program in School Psychology — the second of which he helped to develop, Dr. Capuano provided important leadership in developing the school into one of the largest and more prestigious schools at the University. His many accomplishments in this position included establishment of the postdoctoral certificate program in clinical psychopharmacology and its transition to a postdoctoral Master of Science degree program — a program that has earned national recognition and is currently only one of just a few programs recognized by the American Psychological Association for postdoctoral training in clinical psychopharmacology.

As a former faculty member and biopsychologist by training, Dr. Capuano introduced and taught key compulsory courses in both doctoral programs in the School of Psychology. His research included the design, implementation and supervision of experiments in neuropsychopharmacology and health psychology, from planning and evaluating new research to working on the development of compounds and behavioral interventions for clinical use. Moreover, he supervised numerous doctoral dissertations and master’s theses and has published numerous abstracts and research articles with colleagues and former students in various scientific journals.

Dr. Capuano earned his Ph.D. in Biopsychology and two master’s degrees from the Graduate and University Center of the City University of New York, as well as his B.S. in Biological Sciences from Purdue University.

Dr. Luke David Schultheis was appointed to the newly created position of Vice President for Enrollment, Planning and Effectiveness on December 1, 2017.

A national leader in enrollment management, Dr. Schultheis has over 20 years of experience in higher education as a faculty member, chair, dean, and senior administrator, following an initial career in the hospitality industry. He is known widely for his expertise in ensuring student success, particularly for underserved populations, and served as Vice President for the American Association of Collegiate Registrars and Admissions Officers from 2014 to 2017, where he served as inaugural chair of the Strategic Planning Committee for two years. [Full Bio]

Ms. Mazzolla joined the University in 1994 and previously held positions in the Office of International Affairs and School of Psychology. 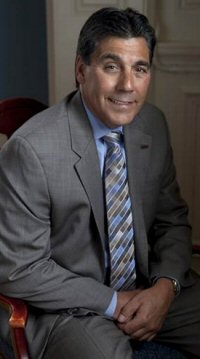 Inaugural Address
“Celebrating Our Past, Building Our Future”
September 27, 2017