Fairleigh Dickinson University, March 7, 2016 –Presumptive Democratic nominee Hillary Clinton commands a strong lead over Republican frontrunner Donald Trump among registered voters in New Jersey, but in other ways, the tumultuous presidential campaign continues to confound expectations. The most recent statewide survey of registered voters from Fairleigh Dickinson University’s PublicMind finds that overall, Clinton bests Trump by a 52 to 36 margin among New Jersey registered voters, but does no better than Democratic challenger Bernie Sanders in the same match-up. Similarly, there's no evidence that having Trump on the ballot hurts Republican chances in the state, as the New York real estate mogul is doing only a little worse than Republican candidates in New Jersey have done in the past.

Contrary to some expectations, Republicans show little sign of defecting from Trump: 77 percent of Republican registered voters say that they would vote for Trump, compared to 83 percent of Democrats who say that they'll support Clinton against the former reality TV star. Trump's biggest deficit seems to be with conservatives: only 63 percent say that they intend to support him in November, with 24 percent saying that they'd vote for Clinton instead, if it came down to that.

“Fears that Republicans would abandon a Trump candidacy seem to be overblown, at least in New Jersey,” said Dan Cassino, a professor of political science at Fairleigh Dickinson and an analyst with the PublicMind poll. “There's very little chance Trump could win New Jersey in November, but that's true of basically any Republican Presidential candidate.”

As with most Republican candidates, Trump beats Clinton among white voters (47 to 40), but falls behind among non-white voters (77 to 13). Clinton also does best among younger voters: she wins voters under 35 by a 64 to 21 margin. Registered voters over 60 also prefer Clinton, but by a much narrower 48 to 40 margin. Within New Jersey, Trump does best against Clinton in South Jersey, where he's tied with Clinton 42 to 44. Clinton does best in North Jersey, where she bests him 56 to 33.

“Trump's support in South Jersey shows the big divide in New Jersey politics,” said Cassino. “Culturally, South Jersey is more similar to Pennsylvania than it is to the rest of New Jersey.”

In the poll, voters were also asked describe Clinton in one word, and the results were predictably bipolar. The most popular responses among New Jersey voters were “Liar,” “Dishonest,” “Experienced,” “Strong,” and “Good.”

“Unlike with Trump, Clinton's critics have focused on one trait in particular, her perceived untrustworthiness,” said Cassino. “Elites have been hitting her on that point for years, and the message seems to have come through.”

Descriptions of Trump were generally more negative. The most popular terms used to describe him were “Arrogant,” “Idiot,” “Good,” “Bad,” “Obnoxious,” and “Ass.”

Despite arguments that Clinton is more electable than the self-identified socialist Sanders, the Vermont Senator does about as well as Clinton in New Jersey. Like Clinton, he bests Trump by a wide margin among registered voters, 51 to 36, and inspires about the same amount of loyalty from Democrats, with 79 percent of Democrats saying that they'd prefer him over Trump (compared to 83 percent of Democrats who would vote for Clinton over Trump).

Sanders' liberal credentials don't seem to help him with liberals in New Jersey: the same proportion of liberals say that they'll support him in a match-up with Trump (77%) as would support Clinton. Similarly, Clinton's advantage in support among non-whites in the primaries doesn't seem to translate into additional support among non-white voters in the general election, as Sanders does just as well as among such voters.

“Just like Trump doesn't poll any worse than a generic Republican, Sanders doesn't do any worse than any other Democrat in New Jersey,” said Cassino. “Clinton may have an electability argument to make in other states, but there's not one to be found here.”

Response to question: In a single word, how would you describe Donald Trump?

[Only responses offered more than once included] 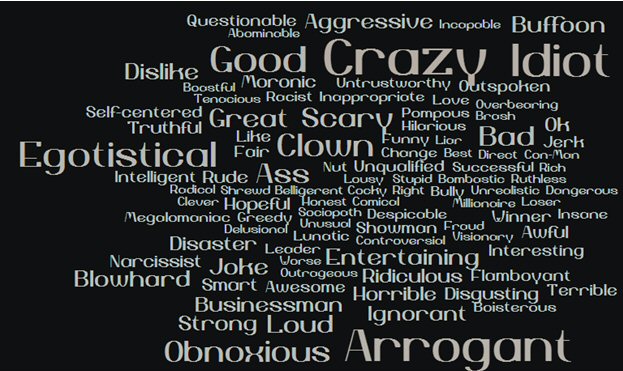 Response to question: In a single word, how would you describe Hillary Clinton?

[Only responses offered more than once included] 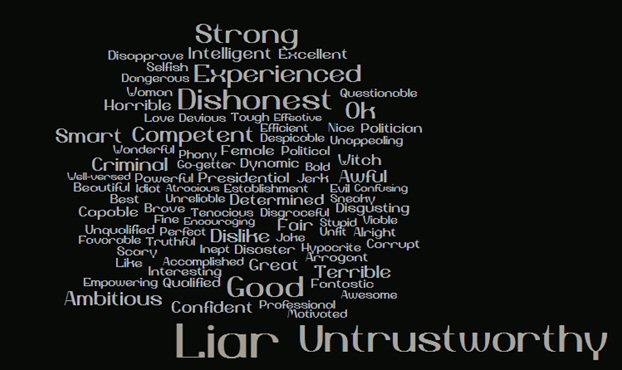 Methodology - The Fairleigh Dickinson University PublicMind survey was conducted by landline and cellular telephone February 24-28, 2016 among a random statewide sample of 694 self-identified registered voters. Results have a margin of sampling error of +/- 3.9 points, including the design effect.

Methodology, questions, and tables on the web at: http://publicmind.fdu.edu

The most recent survey by Fairleigh Dickinson University’s PublicMind was conducted by telephone from February 24-28, 2016 using a randomly selected sample of 694 self-identified registered voters in New Jersey. One can be 95 percent confident that the error attributable to sampling has a range of +/- 3.9 percentage points, including the design effect. The margin of error for subgroups is larger and varies by the size of that subgroup. Survey results are also subject to non-sampling error. This kind of error, which cannot be measured, arises from a number of factors including, but not limited to, non-response (eligible individuals refusing to be interviewed), question wording, the order in which questions are asked, and variations among interviewers.

PublicMind interviews are conducted by Opinion America of Cedar Knolls, NJ, with professionally trained interviewers using a CATI (Computer Assisted Telephone Interviewing) system. Random selection >is achieved by computerized random-digit dialing. This technique gives every person with a landline phone number (including those with unlisted numbers) an equal chance of being selected.

Landline households are supplemented with a separate, randomly selected sample of cell-phone respondents interviewed in the same time frame. The total combined sample is mathematically weighted to match known demographics of gender, age, education, and race. 379 interviews were conducted on landlines and 315 were conducted on cellular telephones.

The sample was purchased from Marketing Systems Group and the research was funded by Fairleigh Dickinson University.

In a single word, how would you describe Hillary Clinton?

In a single word, how would you describe Barack Obama?

In a single word, how would you describe Donald Trump?

In a single word, how would you describe Chris Christie?

[Randomize order of pres1 and pres2]

PRE1S If the election for president was held today, and the choices were Hillary Clinton and Donald

Trump [randomize], who would you vote for?

PRES2 If the election for president was held today, and the choices were Bernie Sanders and Donald

Trump [randomize], who would you vote for?