Alumna interns at prestigious research lab for the summer

Colette Malyack, BS’16 and MS’16 (Metro), thought big in a New York laboratory this summer: biomedical big data big. She and Daniel Clarke, an FDU student studying electrical engineering and computer engineering, interned with Dr. Avi Ma’ayan, BS’97, MS’01 (Metro), at the Ma’ayan Laboratory, Computational Systems Biology, in the Icahn School of Medicine at Mount Sinai. Working with professional scientists in the Summer Research Training Program, Malyack received hands-on experience and mentorship in both of her fields of interest and study: mathematics and computer science. 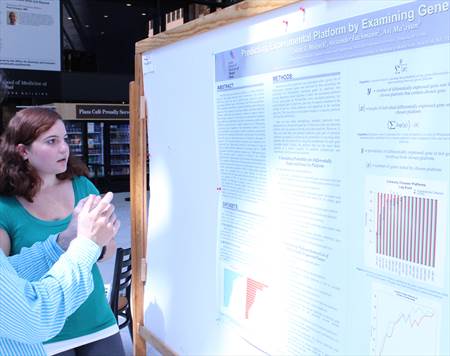 FDU: How did you find out about the internship?

CM: Through career development and Kennedy Sani (coordinator of student outreach and career development for FDU’s Gildart Haase School of Computer Sciences and Engineering). It was good way to apply both of my degrees, and get some real research training, plus an opportunity to do actual work in the field.

Colette Malyack presents a poster on her summer research on the final day of her internship. (Photo courtesy of Malyack)

CM: Biomedical big data science is taking the large amount of data, such as differentially expressed gene sets available through biological research, and attempting to find meaningful information in that data. This could mean associating a certain gene expressed with a system — such as the digestive tract or attempting to associate up- or down-regulated genes with a drug that will correct the regulation.

FDU: Tell us about the Summer Research Training Program.

CM: The program is designed so each summer student has their own project that contributes to the lab in some way, and works with a mentor as well as Dr. Avi Ma’ayan.

I worked with differentially expressed genes, those that have changed their level of expression from normal. They can be up- or down-regulated, meaning the systems affected by those genes would either be receiving too much or too little of the proteins and other things produced as a result of that gene. When genes become up- or down-regulated, the result could be cancer or another disease.

FDU: What did you get to work on? What excited you the most about it?

It appeared that it is possible for the lists to be traced back, which will help in the analysis of differentially expressed gene sets for systems analysis. Tracing the genes back to platforms is significant because it could prove there are platform biases that need to be accounted for. Also, it would mean when enrichment analysis is done, the lab would know which genes were tested, and this can be used to benefit the system analysis.

The assignment excited me because it was an opportunity to apply both of my degrees and contribute to the community. If my project turns out to be successful it can improve systems analysis.

FDU: What did you do day-to-day as an intern?

CM: Day to day, I worked with the differentially expressed gene sets, attempting to normalize the data in R and Python to create a method of associating the lists to the correct platform. R and Python are computer programming languages. R is mainly used for statistics and has a number of libraries created to download and analyze biology-related information. Python has gained a lot of popularity lately due to its ability to compute processes at a much faster rate. These languages were used to clean and analyze the data sets we had for the lists of differentially expressed genes.

I used my computer science degree when I worked in Python with the data, and I used my math skills to apply statistical analysis to the data.

FDU: What did you learn this summer?

CM: We had the opportunity to work with some of the leading experts in the field and learn how they conduct research and apply themselves to their current project. In the lab we were exposed to a number of challenges and new methods of solving those problems; with the help of our mentors we were able to learn how to approach those problems and solve them in a more efficient way.

FDU: What’s next for you after the internship?

CM: After this internship, I hope to continue working in a field that applies my math and computer science skills in a way that contributes to the community. Eventually, I would like to attain a Ph.D. in Machine Learning. This internship really helped expose me to research and the research process.

FDU: What's it like to do work that's on the cutting edge of scientific research, and to be part of a new generation of scientists?

CM: The feeling that the work will be applied to real issues in the field is amazing. It really added meaning to what I did, and motivated me.