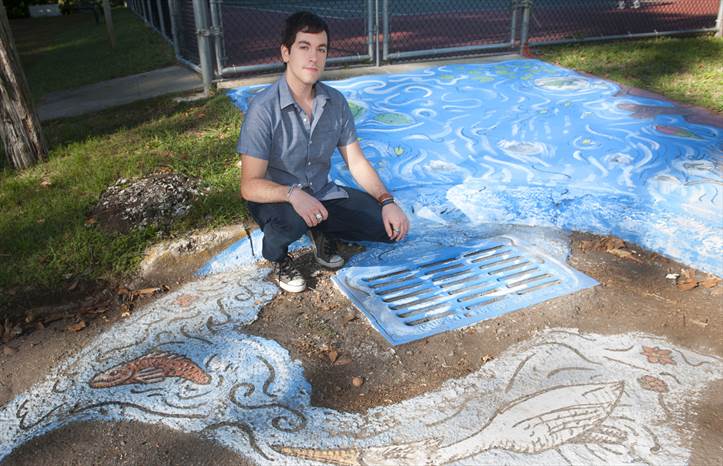 In response to a call from the Friends of the Hackensack River Greenway last spring, local artists submitted designs for a storm drain mural project — the idea being that vibrant works of art will help promote clean waterways and deter pollution.

In August, the three selected artists painted storm drain murals in Marie Andreas Park, spilling their designs over the drain covers and onto the surrounding concrete and cement as additional canvas.

“People really respect art out in public and admire it,” says artist Keith Richard Griffiths, BA’12, MBA’14 (Metro), who created a mural depicting small ecosystem against a bright blue background. “Having it around a drain site is one more deterrent to throwing out garbage there and destroying something.”

Annebelle Bower, a former New Jersey Watershed Ambassador through AmeriCorps, came up with the idea of applying the mural campaign — which has some national grassroots traction — locally.

“Not everyone realizes that storm drains drain down to lakes, rivers or streams,” says Bower, whose watershed assignment included the Hackensack River, Hudson River and Pascack Brook. “They think anything that goes down the drain is going to get treated, but that’s not the case the majority of the time. Most storm drains lead directly into our waterways in New Jersey.” 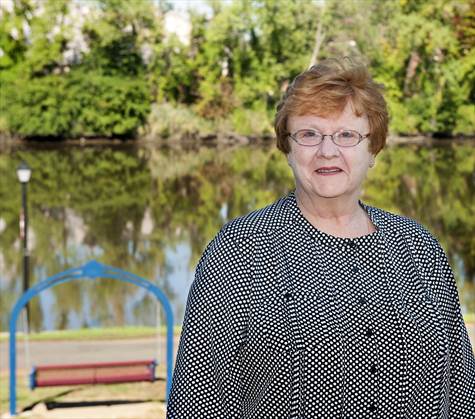 One of those waterways divides Teaneck and Hackensack, and FDU’s Metropolitan Campus: the Hackensack River. To both Griffiths and Maryann Sena, BA’92, MA’08, MS’12 (Metro), protecting that river is meaningful. 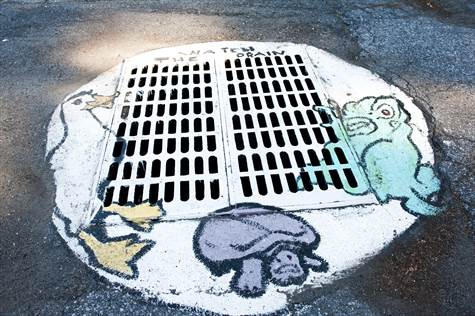 Sena, a periodicals coordinator at Frank Giovatto Library, can see the river from where she works. That view, so treasured by University founder Peter Sammartino, too, inspired her to give back to the community.

“Even if it’s small, I think it’s important to do whatever you can,” says Sena. “Individual projects can translate into societal change. Anything that one person does can affect many people.”

Alumna Maryann Sena, periodicals coordinator for Frank Giovatto Library, gazes out at the Hackensack River each day. She incorporated animals who rely on a clean river into her storm drain mural: a duck, turtle and frog.

Relying on her background in biological and medical illustration, and subsequent freelance portrait work, Sena features a duck, a turtle and frog in her mural, against a white backdrop.

Storm drains are “not a garbage can. They’re part of a living ecosystem,” says Sena. “Anything in the drain goes into the river. Creatures depend on clean water and a clean environment.”

“I used to bike on the Hackensack Greenway as a kid,” he says. “Now, I walk along there.” Growing up in Teaneck, Griffiths adds, “I always saw garbage in the river.” The creative aspect of the project appealed to his artistic sensibilities, while the idea that he could put his talent to work to benefit the planet appealed to his concern for the community.

“They speak to people right away,” says Griffiths of the storm drain murals. He calls the art “in-your-face” and “bright and colorful.”

The whole point of the project, giving the artists a big and public canvas, is to create something educational and beautiful — art that passersby will take notice of, reflect on and consider before polluting.

Unfortunately, “the main cause of pollution in the waterways is from people. People think it’s coming from factories. That’s really not the case. It’s coming from us,” says Bower.

“It’s a wide variety of things that go down these drains: fertilizer, pesticides, oil and gas leaking from cars, pet waste and more. These pollutants can affect water chemistry and cause a whole host of other issues,” she adds.

While Griffiths and Sena painted, people out jogging, walking dogs and even driving by, stopped to ask about the project and watch the artists at work. The artists applied a sealant, used acrylic colors and exterior paint, to ensure that the paint itself wouldn’t seep into the ground or bleed into waterways. Those materials will also help protect the murals against the elements. A gravel texture underneath prevents passersby from slipping on the design.

“The environment is just not going to be there unless you take care of it, respect it and don’t abuse it,” says Sena. “Storm drains usually blend in, but something like this brings awareness and that’s the motivation.”

The environmental education and art campaign continues this fall with Teaneck schools; Bower says they could hold a similar design competition for young students, and that might eventually expand to include private citizens who want storm drains near their homes to be painted.