The social employee: FDU marketer discusses the future of business with social media

By Dan Landau
Mark Burgess (E-MBA'94), an adjunct professor of marketing in FDU’s Silberman College of Business, recently gave the keynote address at the 2015 PR News Platinum PR Awards event in New York City before a packed house of over 300 PR executives from around the country. 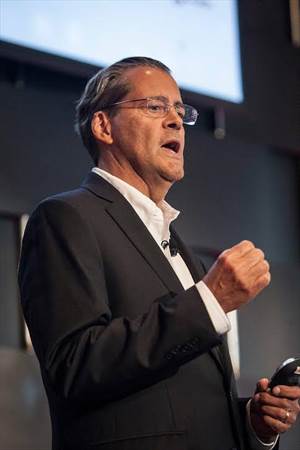 Based on the best-selling book, “The Social Employee,” that Burgess co-authored, the keynote centered on reimagining the future of business through social media. Burgess focused on the importance of PR practitioners and executives increasing their role in and presence on social media channels (from Twitter to Facebook to blogging) by leading the way for engaged and empowered social employees.
“Becoming a social leader is no longer optional — executives need to lead by example,” says Burgess, citing a 2012 Brandfog study, which found that 82% of employees were more likely to trust a brand whose executives were involved in social media.
In conjunction with the keynote address, PR News interviewed Burgess about the benefits organizations derive from social employees.
Besides teaching several graduate-level marketing classes at FDU, Burgess is also an FDU alum, graduating in 1994 with an Executive MBA. Burgess is the president of Blue Focus Marketing LLC and earlier this year, gave a TED talk at TEDxNavesink.