Yelena Aronson is a digital/traditional artist whose background is in architecture. She holds the MFA from Brooklyn College, Brooklyn, NY and the BA from the School of Visual Arts, New York, NY. She worked as an architect in Moscow before emigrating to the US. She has exhibited in US and Europe and has taught at FDU since 2000.

2005 Artists Group Show at the Red Mountain Gallery, Ouray CO. Published in Art in America Gallery Guide and on the Internet.

2001, "Reactions" Exit Art Show, New York, NY
“Reactions”, Exit Art’s Exhibition about the Public’s Response to 9/11, was gifted to the Library of Congress in Washington, D.C. and became part of its Permanent Collection

Yelena Aronson teaches Computer Art as a professor at Fairleigh Dickinson University in New Jersey. She has worked as an architect in Moscow, Russia prior to coming to US.
She has shown her Digital art projects and prints in Europe, New York and New Jersey galleries, and on the Internet. 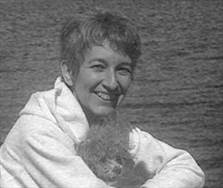