Marguerite Ferrell is currently the Senior Manager of Recruitment and Education at the New York Red Bulls professional soccer team. She was the first female hired in a full-time capacity within the New York Red Bulls Training Programs Department. At the New York Red Bulls, Marguerite is in charge of recruiting, managing, and educating over 150 coaches each year.
From March 2012 through November 2013, Ferrell assisted Kaz Tambi, former U16 Women’s National Team Coach, at Seton Hall University where she assisted in recruitment, game analysis, and coaching. From 2006-2011, Ferrell was the first assistant at Fairleigh Dickinson University Women’s Soccer program, aiding the Knights with all aspects of team management. She helped organize and schedule practice, team meetings and season schedules. Additionally Ferrell was responsible for administrative duties such as managing the team budget, recruiting efforts and organizing and executing community outreach initiatives. In 2009, Ferrell was named ‘Coach of the Year’ by NJ.com
Ferrell was a First-Team All-Northeast Conference player at Fairleigh Dickinson University Metropolitan Campus and has previous coaching stints with her alma mater and the NJ Wildcats of the USL W-League. Ferrell was one of the most productive field players in Fairleigh Dickinson women's soccer history and still ranks second all-time with 45 points and 19 goals. She was named the NEC Freshman of the Week during the 2002 season and went on to earn First-Team All-NEC accolades after tallying eight goals and 17 points during her senior season.
Ferrell graduated from FDU in 2006 with a bachelor's degree in liberal arts and earned her master's in public administration from FDU in 2010. Ferrell is a United States Soccer Federation ‘A’ License Coach and a NSCAA Staff instructor and holds her NSCAA Advanced National Diploma.
Ferrell has been an adjunct of the University since 2015. She teaches Coaching Leadership as part of FDU’s graduate Masters of Sport Administration program. 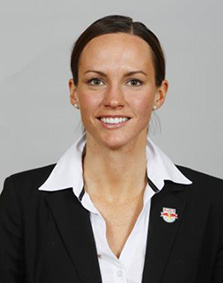