Kenny O'Boyle is a product of the Fairleigh Dickinson University Metropolitan Campus. He graduated with a Bachelor of Arts in Communications in 2010 and with a Master of Arts in Professional Communications and Media Studies in 2011. When he first arrived on campus as a student, he found his second home in WFDU. His mentor, Duff Sheffield offered Kenny a part time position as a student. From there, he began to learn "The Art and Craft of Broadcasting" and continues to learn more everyday. In addition to his work as a student at WFDU, Kenny also became heavily involved in the broadcasting and announcing of sporting events for both the Metropolitan and Florham Campus athletic departments. He was a graduate assistant for the FDU Knights and has been the "Voice" of the FDU Devils for the last seven years. He even accompanied the Devils Women's basketball team to Stevens Point, Wisconsin to call their first ever National Championship.

Currently, Kenny is working full time as the WFDU Broadcast Media Operations Manager. In that position, he is responsible for many of the production and engineering tasks that face the radio station on a daily basis. He was an integral part in the development of the new WFDU Web-Video Streaming service and is currently heading up the re-building of WFDU's live performance studio. With WFDU undergoing a transmitter upgrade and power increase, Kenny will be managing the new classical music station WFDU HD 3 and is responsible for training the many new volunteer staff members on both HD channels. He is also responsible for bringing new underwriters to the station.

For about six years, Kenny has been the host of "Let There Be Country," one of the most popular shows on the station. In addition, he is the co-host and producer of "The Greg Herenda Show," with the FDU Knights Head Men's Basketball Coach. As a sportscaster on WFDU and for both FDU Athletic Departments, it makes sense that he was named WFDU Sports Director and also teaches sports-casting and other broadcasting, speech and communications classes for the University. 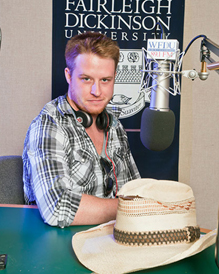